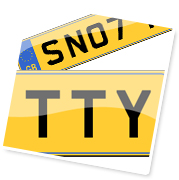 Scottish number plate prefix SN has been hastily replaced with TN in Edinburgh because DVLA officials have deemed the prefix too "offensive".

The DVLA has already released SN05 and SN06, so why the change of heart with 07?

Well, the plates clearly look far too much like snot.

There has been a general outcry of "bureaucracy gone mad" amongst dealers who are used to, and indeed, make a living from, seeking out new and interesting name and number combinations; and it has to be said that this sort of censorship in itself can cause more offence than it intends to contain. Surely nobody would sniff at such innocuous word?

Not according the DVLA:

"It is our policy that any registration mark that can be construed as being offensive to people will be suppressed. In this case, the SN07 marks would have been too similar to the word 'snot' and, as that could possibly offend some buyers, they were replaced with new TN07 registrations."

And how disappointing it must be for Edinburgh residents who can no longer sport patriotic plates on their 07 vehicles, as the rest of Scotland do.

Quoting an article in the Edinburgh News, Tim Shalcross, spokesman for the British Institute of Advanced Motorists, said:

"I think a lot of people would have been very keen to have those plates. I don't think its particularly blatant word either. After all, the registration is SN07 - which is very different to SNOT. The DVLA obviously have too much time on their hands."