Driving Test: The DOs and the DON'Ts

June 1st marked the 80th birthday of Britain's driving test. It has changed a lot over the years - for example the ability to reverse park was only added to the criteria in 1991.

For many drivers the driving test has been the source of many memories - both happy and traumatic - over the last 80 years and it will continue to be just that for the hundreds of new drivers coming through every day.

To celebrate the Oak Anniversary of the DVLA's driving test we asked our followers on Twitter and Facebook and our customers what their fondest (and darkest) memories were, what we got was a great list of DOs and DON'Ts that should be studies by all young, future drivers hoping to take their test soon. 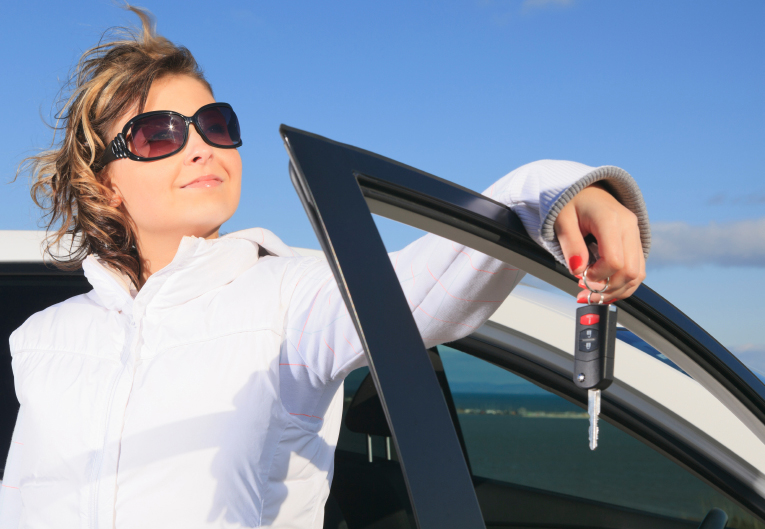 You know how to drive!

This is just one of those times where you know you are being watched and you have a lot riding on the next 40+ minutes of driving, so you are going to be nervous. Just remember all the preparation you have put in and let the pressure fall off your shoulders and you will get through your driving test no problem.

One young lady thought she failed her driving test in the first five minutes after narrowly avoiding a van. Thinking it was over she continued driving naturally, and it turned out she passed!

Getting confident and loose could mean the difference between a failed driving test and a successful driving test. 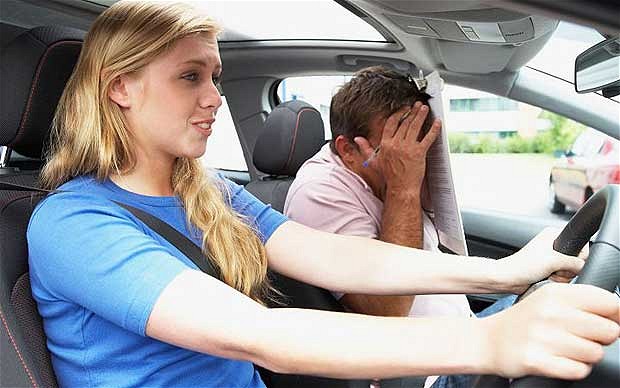 You are always being watched, but you don’t need to overthink things. Stick to what you know, you have had enough time to learn from your instructor what is expected of you.

When asked to do a three-point turn in the road, Iain from Wales thought he found a loophole of sorts when he used a driveway to perform the manoeuvre. Obviously the examiner was not impressed.

Another gentleman, Daniel, recalls his first driving test when he noticed his assessor did not have his seatbelt on and thought he’d earn extra points by sternly requesting he do so. “We were still on the private ground of the test centre car park,” the examiner said. “I am not required to do so.” It was all downhill from there.

Your assessor is the one who decides whether you pass your driving test or not, don’t try to get one over them or you aren’t going to have a good day. 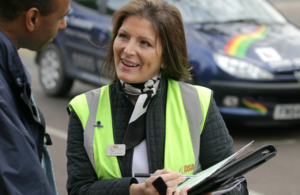 Strike Up a Conversion

Seeing as your driving test lives and dies at the whim of your examiner you may as well get them on your side. I know whether they like you or not shouldn’t affect your scores but we are all human so it will have some impact at least.

Sarah from Manchester got on with her assessor so well that at some point during the driving test she stopped being directed and was told to drive until she found somewhere to test her parking. 15 minutes later they were back at the test centre and Sarah was apologising for forgetting to find somewhere to park. “It’s okay, I’m sure you’re capable” said the examiner!

I’m not suggestion you become a teacher’s pet, but being friendly and getting off on the right foot with your examiner will go a lot way. 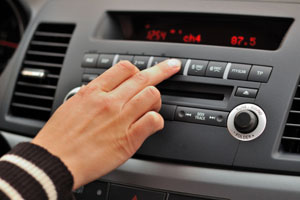 Turn the Radio On

There is such a thing as too confident and nothing says this more than a radio during a driving test!

Keeping in mind you are supposed to get on with your examiner, the last thing you want to do is to put the radio on. I know it can be awkward if there isn’t a conversation going, but blanking out your assessor isn’t the way to go.

Not to mention it could potentially be distracting and could even drown-out your examiner’s instructions. This will not help your final score.

That said, who knows, maybe you can bond over your taste in music? I wouldn’t risk it though. 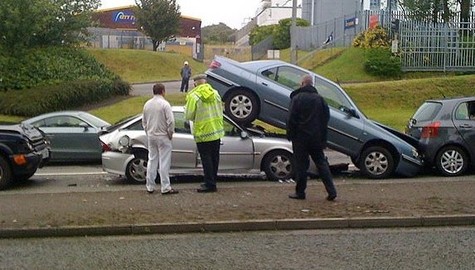 Did you know in certain cities in America there is such a thing as an automatic pass in a driving test? You basically have to avoid or prevent an accident. It is basically a shortcut to telling your examiner that you are a safe driver, which is enough across the pond.

Unfortunately it isn’t enough over here – not that you should want to be anywhere near an accident on your driving test anyway – but it can be points in your favour.

Jordan, from Newcastle, was warned that there would be an emergency stop on a particular road. The examiner looked out the back window while on the road, likely checking if there was anything behind them, so Jordan waited for a signal. Suddenly, a child on a bicycle rode out in front of them. Jordan slammed down for an emergency stop, sending the examiner into the windscreen.

“Okay, you’ve passed,” said the examiner. “Please take me back to the test centre, my head hurts.” 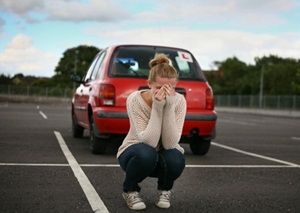 Let Your Fears Get the Better of You

Fear combined with nerves is a horrendous combination, and it is what leads to more driving test failures than anything else.

Mark remembers stopping at a crossroads and outright refused to drive any further, purely out of fear of causing an accident. Anne from Berkshire even remembers asking her examiner to take the wheel at a roundabout. These are instant failures, and brought on by fear.

Some go even further. One girl, who has never passed her test, and swerved and bailed from the vehicle while it was still moving during a driving test. The reason? A wasp flew into the car.  She says if she was ever in that situation again … she would react in exactly the same way.

Fear makes fools of us all. 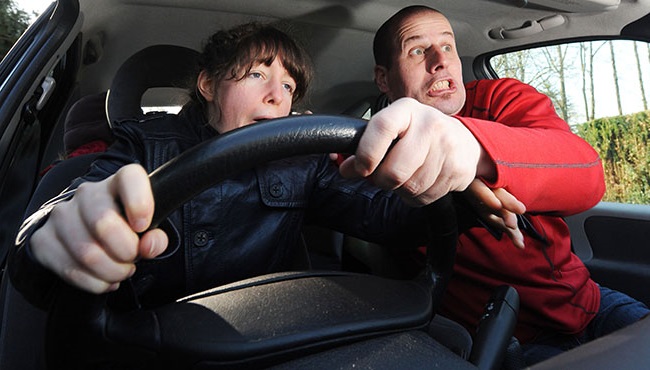 Just like how some people let their fears takeover you also find young drivers putting themselves in position to fail just by focusing on the wrong thing.

Gary from London bravely admits he failed his first driving test after checking his phone while driving, and his second after asking his examiner to take the wheel while he checked his phone. I guess you can count that as improving, sort of?

You’ve got to remember some things are more important than others. On a driving test a major fault has more weight than a minor, for example, so avoid majors at all cost even if it means a minor here or there.

Kathryn remembers putting herself in a similar situation on a driving test. She describes it much better than I ever could.

“I swerved to avoid an injured pigeon, and ended up in the path of an articulated lorry. At this point, I did the sensible thing and closed my eyes. My instructor took the wheel and deposited us in the roadside ditch. Upon opening my eyes, I discovered my instructor was nearly in tears. I failed.” 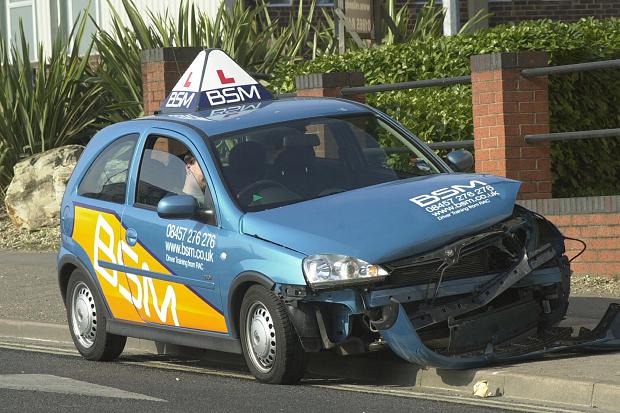 Once again, you can drive!

You should have logged at least 30 hours before you even thing of having your driving test, at which point, if you used the same instructor, you should the vehicle you take like the back of your hand.

Don’t be like Kerry who found herself rolling down the hill while attempting to parallel park, completely missing the fact that she had stalled the vehicle.

Don’t be like Simon who sabotaged himself by completely forgetting how to open the hood of the car during the show-me-tell-me portion of the test. You’re better than that!

You should have also passed your theory test with flying colours, so you shouldn’t have to be reminded that 40mph isn’t the national speed limit, like Freddy from London had to. 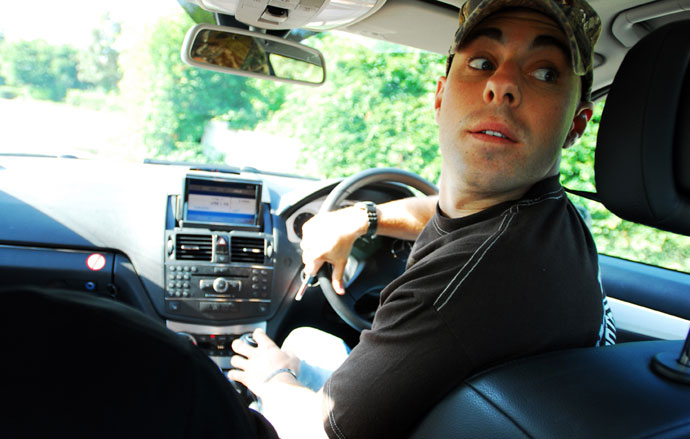 The harsh reality of driving tests is that you will make a mistake – you know it, I know it, and your examiner knows it. All drivers make mistakes, it isn’t an issue, you just need to convince the examiner that you can handle it safely.

Tim vividly remembers his first driving test when he was asked to take the next right, and he did – right into the forecourt of a garage.

“Erm … on second thought perhaps we don't need petrol,” Tim stammered as he pulled up next to the pumps. He turned back out onto the main road and made the correct turn off as suggested by his assessor.

Tim is still haunted by the mistake 36 years after passing, but it his rather humorous recovery that likely saved him. You know the examiner knew he made the mistake, but he wasn’t going to fault him after he reacted accordingly.

You might find yourself in similar situations. Just remember, you can drive, and you can get yourself out of a situation with a bit of quick thinking. 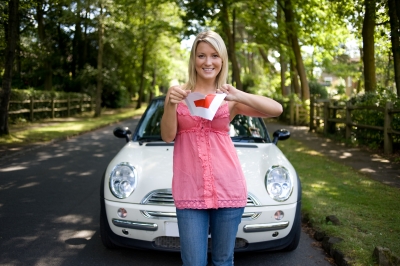 Last, but certainly not least, is this.

In 2014 only around 50% of tests were passed. This is counting people who took multiple tests. This means most people fail at least once, and a lot of people might take several tries.

You can react to this statistic one of two ways.

Either you can panic and let your fears get the better of you, meaning you get nervous, forget your basics and make your job a whole lot hard.

Or you can realise the pressure is off. You can have fun with your test and make it an enjoyable experience for you and your examiner. And if you fail, so what? It was a learning experience and you will be twice as good next time.

Keep persisting, keep trying, put the work in and you will see results.

Above all else, remember, you CAN drive!