Number plates can be personal, and they can represent many things, be it a family member, name, initial, even a pet! But number plates can also be rude and sometimes even offensive.

Number plates can be personal, and they can represent many things, be it a family member, name, initial, even a pet! But number plates can also be rude and sometimes even offensive.

That’s where the DVLA step in with their black-list of banned number plates.

They now generally don’t even release words that are rude or offensive and have removed letters like I from millennium style registrations as to avoid certain unsavoury words on offensive number plates. Plates that also end with the letters BUM, SEX OR ASS are automatically banned on number plates in the UK, and added to the DVLA black-list.

But some still slip through the net, plates like PEN 15, ORG 45M AND FU 2 have all been previously released by the DVLA, while BA57 ARD, AA55 HOL AND BL08 JOB are all banned number plates by the DVLA.

Obviously, some releases are worse than others for number plate releases. In 2019, the DVLA released the long-awaited 69 number plates, which must have put their black-list staff into overdrive. Of course, this release brought with it an abundance of rude possibilities.

Some people are extremely unhappy with the 69 release and there are many stories online about people who picked cars up from dealers, particularly in the Birmingham area, who were too embarrassed to take the car home. This of course is because the majority of their registrations started with BJ69, but were not banned by the DVLA.

Let’s take a look at some of the banned DVLA number plates from 2019 below. 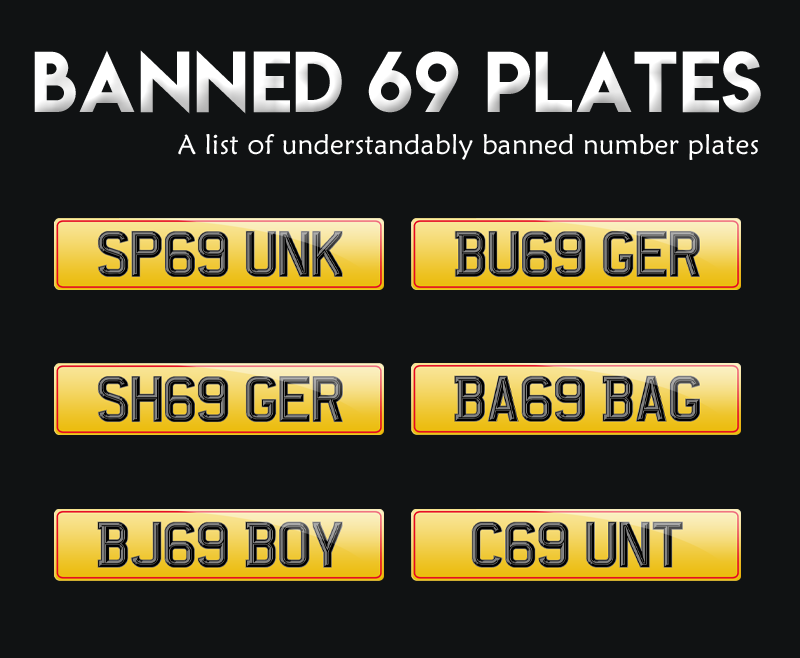 Here’s the final list we have for you today of banned number plates.

And so, we have reached the end of our banned number plates list (s), and that’s quite enough of that.