SUE's a popular choice for number plates, and SUE 1 is by far the best of the bunch! In this number plate story, National Numbers customer Simon Westwood shares the history of this charming dateless registration.

The number plate SUE 1 was first issued in August 1955, to an Aston-Martin DB 2/4 mark 1 (late model) drophead, chassis number LML 1042. It was issued in the Birmingham area. The gentleman who bought the car and registered it lived in Ullenhall and was, so I understand, 'getting on a bit'. In 1961, he decided that this beast was going to be the death of him and approached an old friend of my Father to sell it for him. 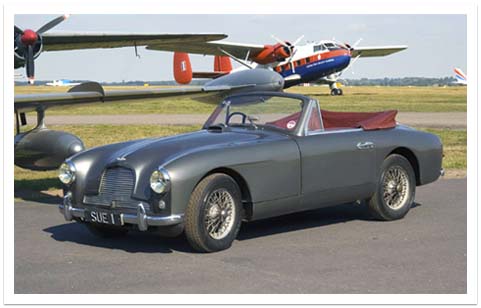 Neville Jarrett owned 'The Forge Garage' in West Hagley. Neville had been a car dealer and motor engineer for many years and had operated from a number of sites, including one in Bristol Street in the centre of Birmingham. He and my Father, Norman Westwood, came to know each other through the Sutton and North Birmingham Automobile Club (SUNBAC). They were both active members. My father was also in the Motor trade, being the managing Director of the family engineering business 'Westwood Rim and Patents'.

My father went into the family business during the war and was actively engaged in the production of parts for tanks. The factory was bombed, but was back in production quite quickly. At that time, my Grandfather was the Managing Director and was most definitely of 'the old school'; wing collars and dark suits. His taste in cars was also very conservative and my father's desire for a sports car was actively discouraged. My grandfather died in 1957 and my father became the Managing Director. He lost little time in procuring a new MG A, WOV 879, as a fun car to go with his 1952 Wolseley MOV 522. My mother also drove the MG.

In 1961, Neville Jarrett contacted my father and told him about the Aston-Martin. Whilst my father would have loved such a car, he decided that it was a bit too much of a luxury sports car for him to justify the purchase. Neville was, however, quite persuasive and convinced my father to meet up with him at a pub in Shirley so that they could have a drink and a chat and father could see the car.