To number plate dealers Northern Ireland is a paradise of private registrations. Vehicle after vehicle sporting a dateless number plate containing the letters I or Z. Occasionally you’ll see a JIL or a GAZ and you calculate in your head just how many people across the way would love to have one. It has been a long time – the 1950s – since that sort of plate was standard outside of Northern Ireland, so it can be a little moment of nostalgia every time you walk onto the streets.

An example of what you might see in Northern Ireland

I guess that would be the silver lining to one problem that has frustrated our customers from Northern Ireland for a very long time. Operating under DVA Coleraine (not DVLA Swansea), Northern Ireland is almost completely independent from the rest of the country. This makes the process of transferring a number plate to a Northern Irish car more complicated and more cost worthy (£200 on top of the price, in fact).

This problem may soon be rectified. We at National Numbers learned recently that the DVLA and the DVA plan on merging, bringing Northern Ireland up to date with the rest of the country. The new unified DVLA will be able to offer all the same services to Northern Irish drivers as the rest of the UK, meaning customers will not have to pay excess for what should be a simple transaction. It also means Northern Ireland will get the DVLA’s retention system, giving owners the ability to keep registration marks on paperwork – meaning there is no immediate requirement for vehicles and private numbers can be retained at the end of a car’s lifespan.

Long gone would be the days when our Irish customers felt victimised by the additional charges we as a dealer had to awkwardly explaining, stopping one huge headache on our part. As with anything though, if you open one door the draft will slam another one shut. Even this change with all its obvious positives has its downside.

The system that is currently in place allows drivers to sell their Irish number plates, and upon removal the drivers are issued with another dateless number plate. Irish sellers can keep selling their number plates over and over again, each time getting a new dateless for free from the DVA. This system is beneficial to all parties, as the sheer number of them available on market has meant the price of them can be very, very cheap. 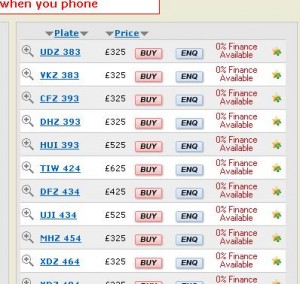 There are many cheap number plates available on our website.

Under news rules though, the DVLA will make these number plates non-transferable, effectively killing that market. Buyers looking for cheap, dateless number plates to hide their vehicle’s age or to make their refurbished vehicle road-ready will have less choice and of course the price will go up. They may even stop issuing them altogether; replacing them with the same “Current Style” number plates the rest of the country gets issued.

We don’t really understand why this is. We never understood why the DVLA made re-issued GB registration plates non-transferable either. There are costs involved in reselling a number plate so it is not as if the DVLA will lose money from it. It is not that the DVLA are particularly against the private number plate industry either, they do make a lot of money out of it themselves after all. We can only assume that the DVLA are doing it so that there is more interest in their yearly releases as well as their auctions.

It is indeed a shame that there are losers in this new deal, but at least our friends in Northern Ireland will reap the benefits of a fully functional, up-to-date DVLA system in complete harmony with the rest of the UK. Despite losing a great source for cheap dateless plates it should be easier for us to help our customers buy and sell number plates.

The DVLA suggest that the earliest the changes will take place is June 2013, most likely later, so there is still a fair way to go before Northern Ireland will be on equal footing with the rest of us. We suggest those looking to buy cheap dateless number plates do so now while there is still time and Irish sellers should get their plates on the market.