In my short time in the number plate industry I am constantly being asked what “styles” are available. Take this email I received from a customer recently: 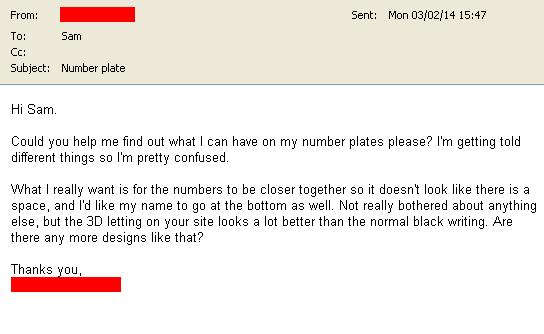 Obviously everyone wants to stand out and inject a little bit of personality into his or her car, but sometimes this hits a roadblock when only certain things are legal. Hopefully this fills the blanks and gives you an idea of what is allowed and why.

What is an “acrylic number plate”?

Putting it simply, an acrylic number plate is the physical slab of plastic that you attach to your car. But that is putting it very simply though. More accurately you would say it is an approved method of displaying the registration number that the DVLA have given to your vehicle.

Where can I pick up my number plate?

Like many things in this modern world, the purchase of a new set of plates is not as simple as it used to be. To try to limit vehicle crime, all suppliers and manufacturers are required to be on the DVLA RNPS (registered number plate supplier) list. In other words, you can’t pick up an acrylic plate from any Dom, Richard or Harry.

To find details of you’re nearest supplier, follow this link and see for yourself.

This isn’t only bit of red tape governing the design, manufacture and display of number plates either. Specific requirements are set out in the Road Vehicles (Display of Registration Marks) Regulations.

Obviously some of these regulations restrict how and where the public buys. There is a whole host of documents, for example, that someone will need to bring with them in order to walk out with a number plate. Not only do you need these to prove entitlement, you also need them to identify yourself.

What do I need?

One or more of the following...

3. A bank or building society statement

5. A debit or credit card

8. An ID card from your country of origin if you are not a UK national.

Who says it is a free country?

Don't panic though; I’m trying to not be scary. You do only need one of the above as long as it confirms your name and address.

You cannot ask for just any registration number of course.

To confirm you have the right to the mark, you will need to produce one of the following (again, originals, not copies)

1. A vehicle registration certificate (V5C or V5CN I)

Not as simple as it seems on the surface, is it?

This form is included with the return of documents from DVLA, Swansea following a cherished transfer. In other words, you have purchased a private or personalised registration, DVLA have completed the transfer and you, therefore, require a new set of plates.

In many cases, you will have purchased your new registration plate through a reputable cherished number plate dealer (hopefully a member of the Cherished Number Dealer Association/CNDA).

As well as organising the transfer via DVLA, such dealers also offer various types of acrylics to order online. These dealers are also registered RNPS and, because they handle the original documents, can legally send you a set of number plates in the post.

Since the manufacturing processes is a skilled one requiring considerable quality control, most dealers contract out the orders. Manufacturers themselves have to be on the RNPS list too and often they package and supply the raw materials (acrylic, numbers and letters etc.) to various outlets along with the necessary associated equipment.

One manufacturer in Sheffield, Jepsons & Co, has actually been in business for 128 years and is probably the oldest maker and supplier of number plates in the world. They still even make the beautiful pressed metal black and silver plates – but these can only go on vehicles registered before 1980.

Can I do anything to make this easier?

To be honest, yes, by virtue of the Internet there are companies who will send out a number plate without the required evidence. Obviously though, just because you can legally buy them does not mean you can legally use them. Dig deep and you’ll find these are what are called “show plates” AKA “This is only for show!”

When ordering one of these the onus is on you to make sure the number plate is legal. If it isn’t then you face the full wrath of the law – which I will cover later.

The DVLA's attention has been drawn to these companies many times since it would appear highly unlikely that the original documents are being supplied through the post. Even though this practice blows an enormous hole in the government’s declared aim to combat car crime, no serious action has been taken.

Obviously, we are all keen to buy items on the Internet with all its convenience and speed but, until and unless the DfT devises acceptable regulations for buying number plates on the net, such companies need to be brought into line.

What happens if you get caught with an illegal set of plates?

The DVLA are very clear about this, so I’ll quote them directly:

“You could be fined up to £1,000 and your car will fail its MOT test if you drive with incorrectly displayed number plates.”

Keeping in mind that “incorrectly” can mean anything from changing certain letters to messing with the spacing, it is not something that should be risked. It depends really though on how unlucky you are, as it really depends on the discretion of the police officer who notices.

So what is allowed on a number plate?

First of all give this downloadable leaflet from the DVLA a read, as that will give you a run down of the size and heights you are allowed.

On top of this you can legally add certain flags, identifiers, borders and also the two-tone 3D effect lettering. Have a play around with the National Numbers Number Plate Maker and see what looks good to you.

During Roads Minister Robert Goodwill's statement on the 9th of December 2013 about removing the need for an insurance policy to be shown when applying for tax, he stated "Getting rid of needless bits of paper, making changes to free up motorists time ... is all part of our commitment to get rid of unnecessary red tape"

Wonder if Mr Goodwill has purchased a new set of number plates lately?

The process still seems tied up with considerable red tape. Perhaps it is time for goodwill gesture!