In Response to the recent "Fraudulent" Number Plate Supplier case

We have recently reported on a number plate supplier in Stockport who has received a two-year suspended sentence due to the illegal supply of acrylic number plates. The man sold over 13,000 number plates over a two-year period and the illegality of the operation only came to light after a customer noticed an issue with the address the plates were sent from.

Despite the man declaring not guilty the court came down hard on him. He received a two-year jail sentence (suspended due to him being a single parent) plus community service, a driving ban and even a curfew. All for fraudulently selling number plates. But what does this mean?

The judge called him an “inefficient and lazy business man” who “chose to take a shortcut”, but the same time accepting that he had “no intention” of actually selling illegal number plates. But he was found guilty anyway. Ignorance is not a great defence by any means, but could it be that this 39-year-old set it up as a side business without actually knowing the legal requirements?

You’ve got to look at how the DVLA themselves regulate this. Since the 1st of January 2003, it was illegal to sell number plates unless you were on DVLA’s RNPS (Registered Number Plate Suppliers) list. Being on this list confirmed you were selling legal number plates in a legal fashion. Part of those requirements were:

Of course, the companies are expected to supply legal plates only also.

The Stockport business man allegedly asked for no evidence from his customers, which is why they courts came down hard on me. Problem is there is a grey area here, as there are websites who knowingly sell “illegal” plates by specifying that they are in fact supplying “show plates”. My research has found no indication that there is anything wrong with this and in fact DVLA say so themselves. 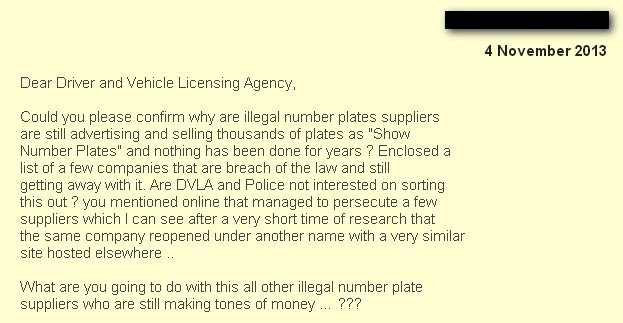 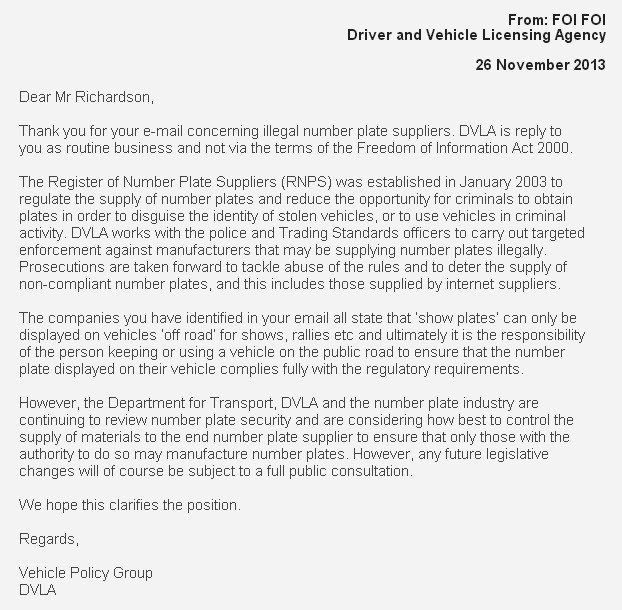 The key quote being:

The companies you have identified in your email all state that ‘show plates’ can only be displayed on vehicles ‘off road’ for shows, rallies etc and ultimately it is the responsibility of the person keeping or using a vehicle on the public road to ensure that the number plate displayed on their vehicle complies fully with the regulatory requirements.

Given that the offending company was “showplates2go.co.uk”, you would assume that he could be cleared from blame on this basis? They are clearly a show plate supplier rather than a legal number plate supplier going by the name of the website. However, as the website is no longer around I cannot say whether or not the website content itself made this clear.

I think the issue is there is too much of a grey area. If the DVLA are cracking down on show plates as well perhaps there should be clearer guides in place about who can supply what? In light of this I have to say a lot of the comments I have seen that damn Andrew Shaw might be judgemental of the situation. Clearly it is not a black and white case of a man wilfully doing something illegal to make money, there is some misunderstanding all the way around.