The Top Gear crew and hosts were chased out of Argentina following controversial number plates that allegedly mocked the Falklands War.

The number plate in question was H982 FKL, which was displayed on host Jeremy Clarkson’s Porsche 928. It can be read to say 1982 FKL, the year of the conflict.

‘This was not a jolly jape that went awry,’ Jeremy Clarkson said, ‘For once, we did nothing wrong.’ 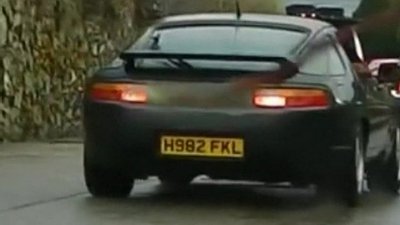 Officials in Argentina disagree with Clarkson, who has a history of stirring controversy, and believe it to be a deliberate attempt to cause offence.

Additionally two other number plates, N269 KNG and EKH 646J, were displayed on a Lotus Espirit and a Mustang Mach I driven by Clarkson’s co-hosts, James May and Richard Hammond. The thought is that the numbers may reference death tolls in the war (258 Britons to 649 Argentinians).

All three presenters maintain their innocence, claiming the unfortunate number plates were changed once they were made aware.

They claim they were subject to unwarranted abuse by an “angry mob” of locals, including veterans from the Falklands War, while in their hotel in Ushuaia. The mob pelted the crew and cars with stones and threatened further violence until they crossed the border into Chile.

‘I'm proud of the peaceful reaction of our people,’ said Juan Manuel Romano, human rights secretary of Ushuaia. ‘I have no doubt they came to mock us.’

One member of the crew was left injured by the ordeal, which Jeremy Clarkson said was the most terrifying thing he has ever been involved in.