'These vehicles are a danger on our roads,' said Patrick McLoughlin, 'We will use all of the information available to us to make sure we take tough action where necessary.'

The planned trial, which have been called a “crack down”, will see six police forces join with Her Majesty’s Revenue and Customs (HMRC) and the Driver and Vehicle Licensing Agency (DVLA) to find and impound foreign vehicle that have not met specific UK road laws. 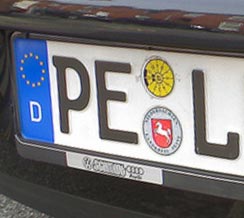 Any vehicle registered abroad that has been in the UK for longer than six months must be taxed.

It is estimated that as many as 350,000 vehicles between 2010 and 2013 did not meet this requirement, potentially costing the taxpayer £60million.

Supporting McLoughlin’s plans, Gloucester Chief Constable Suzette Davenport said: 'It is the responsibility of every driver to ensure that they are obeying the laws that govern our roads.'

HMRC will provide local police forces with details of known vehicles that have entered the country in the last 12 months that may have stayed past the 6-month exemption period.

Drivers of the impounded vehicles will receive an out-of-court settlement demand for the unpaid tax by the DVLA. Failure to pay the settlement will result in persecution.

The trial starts on the 3rd of November and will run until February 2015.