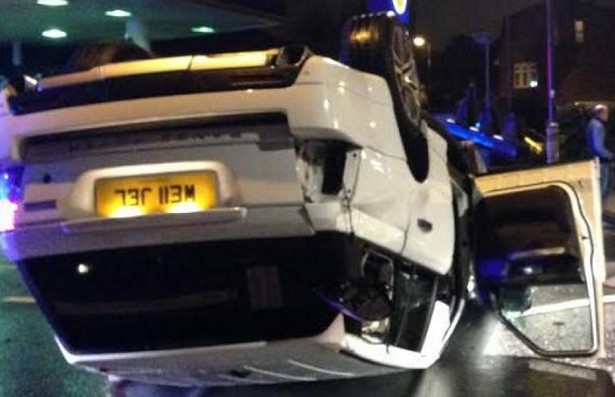 Former The Only Way is Essex favourite, Amy Childs, rolled her Range Rover, which sported a private number plate worth £80,000.

Childs lost control of the vehicle after being overtaken by boy racers, but luckily escaped with just bumps and bruises.

The number plate, WE11 JEL, references a TOWIE catchphrase and is worth more than the white Range Rover it was on.

A spokesperson for the former Big Brother contestant said: ‘Amy is very lucky to be alive. The car is a complete write-off. She is still very shaken but feels lucky.’

The redheaded celebrity should not be in danger of losing the valuable number plate.

‘In accidents like this the DVLA will allow you to retain your private number plate,’ said Craig Priestly of National Numbers.

‘You would only need to obtain a letter from the insurance company.’

The 24-year-old was driving through South Woodford in North London when she crashed the vehicle.

‘Amy was overtaken rapidly by a speeding car full of young boys, which caused her to panic and hit the kerb, which spun the car over a few times before hitting a lamp post,’ said a friend.

‘She was checked by ambulance services, police breathalysed her at the scene and she was clear.’

Ironically Amy Childs appeared in a MoneySupermarket Car Insurance ad campaign just a week earlier. The advert saw her sitting on a wrecked car that also displayed the number plate WE11 JEL.

The star said on Twitter: ‘I am so lucky to be alive thank you to everyone for your lovely messages, god was definitely watching down on me.’

No injuries have been reported from the accident and police have yet to make any arrests.