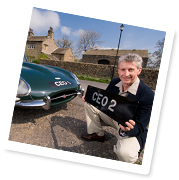 For those who are new to the story, we’ve been closely watching the bidding on Derek Clements’ cherished registrations CEO 1 and CEO 2.

National Numbers’ Chairman, Eric Craggs, got the chance to catch up with Derek whilst taking a short break in Cumbria (which, co-incidentally, also happens to be the home of CEO 1 and CEO 2: the numbers were first registered there).

In fact, Derek and Eric get on famously, not in the least down to their shared interest in classic cars and cherished numbers.

Derek has been interested in classic cars and classic car restoration since 16 years of age. He has spent most of his adult life reviving and refurbishing old and jaded classic cars to their former glory. 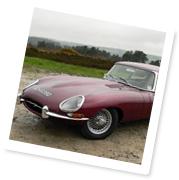 By 1966, at the tender age of 21 years, Derek had bought his first E–type Jaguar for £750. Although he couldn’t afford car insurance, he didn’t let this curb his enthusiasm to drive, and so the car was insured in his father’s name.

Despite insurance woes, this was a fantastic era to be 21 years old. Take the widespread national pride over England’s World Cup glory, and mix it with the image and excitement generated by sensuously–styled classic car that most 21 year olds could only dream of, and you surely have a perfect James Bond–esque dream lifestyle!

Sadly, the dream had to end, and Derek sold the car a few years later for £500: a small loss for such prestige!

Mr. Clements’ connection with Jaguar actually runs far deeper than his first car: his aunt is Mrs Emily Baily whose husband Claude Baily was a chief engine designer for Jaguar in the fifties. Baily was instrumental in the design of the four-cam racing engine that powered the Jaguar XJ13 and he and another designer were jointly responsible for the XK and the V12 engine.

But what happened to Derek’s first love, his E–type? Well, the car was exported to Australia, but happily, he has since received letters from its owner, who is taking good care of her, and making the most of her elegance by exhibiting her in competitions. 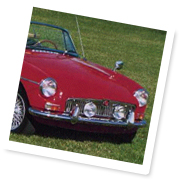 Despite a brief diversion into restoring the classic MGB, Derek was soon lured back to the E–type and other Jaguar cars, and quickly built a profitable and rewarding career based on his favourite hobby.

More recently, Derek bought five cars of elite prestige, including a Jaguar XK120, from a local dealer. One of the cars, an Aston Martin DB6, had the cherished number CEO 1 on it. He sold the car and transferred the plate to one of his E–type Jaguars. As part of the same deal came a Ferrari Daytona on which CEO 2 was registered. The dealer had already sold the car but Mr. Clements bought the plate on a retention certificate.

The online auction has ended for CEO 1 and CEO 2, and so too has this particular chapter in Derek Clements’ life. But I doubt that his love of the classic Jaguar E–type or of cherished registrations will ever die.

If you have an interest in the cars mentioned here, check out the E–type Club or the MGB Enthusiasts Group, or our Number Plate Story GTY 7, a tale about the cherished number GTY 7 that was proudly displayed on Phillip Walton’s Jaguar MK 2 at the Monte Carlo Rally.