Personalised Number Plates From Around The World

Most of the people who will read this blog will be from the UK, but did you know we are actually not the only country that holds interest in personalised car registrations. Numerous countries around the world offer drivers the opportunity to have their own number plate on their vehicle, and many of them work a bit differently to the UK’s DVLA. Here are 10 of my favourites. It is amazing how different the process is in other countries.

Personalised number plates from down under are sold by the motoring authorities in each territory. Drivers pay a few hundred dollars for their chosen registration and then pay a yearly fee to keep it. Ownership cannot be sold between private individuals or transferred, making it a vastly different system to the UK.

Our Australian cousins do differentiate between normal personalised plates, which have to meet a specific format, and “Prestige Plates”, which are shorter and more expensive. Similar to our dateless/cherished plates.

Some territories, such as Victoria and Queensland, use the money raised from the sale of personalised number plates towards road safety activities. A very nice touch and perhaps is something DVLA can remember when they next walk away with millions in profit from an auction.

Belgium operates on a system where number plates are registered to the individual rather than to a vehicle. This means if you were you buy a new vehicle you have to swap the number plate your already have onto it.

Personalised number plates are becoming increasingly popular in country and it has led to the Belgian government introducing a new format with a higher price tag (1,000 Euros rather than the usual 620 Euros) to cope with the rising popularity.

The new format basically allows drivers to have any unique number plate up to 9 characters long, however there are restrictions: You cannot have just numbers, e.g. “1”, “11”, “111”, etc would not be allowed. Rude/offensive number plates are of course banned, like in most countries. More strange is the restriction on number plates that reference political parties. 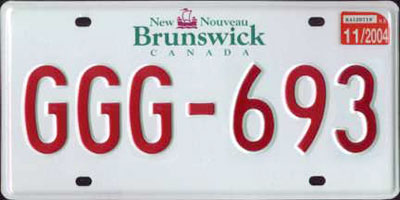 Known as “Prestige Plates” or “Vanity Plates”, Canadian personalised number plates are organised and issued by the province. Provinces decide everything from the cost to what is and isn’t allowed with limited involvement by the national government. Typically you are only looking at a few hundred dollars to pick one up though.

More popular than personalised registrations are what are called “Speciality Plates”. These are plates with different backgrounds and designs to suit the personality and taste of the driver. For example, if you are interested in a particular sports team you can have their logo on your registration plate.

Hong Kong uses the PVRM Scheme (Personalized Vehicle Registration Mark) which works very differently to personalised number plates in other countries. Rather than paying a fee to obtain your choice of number plate you request a registration from the government who then enter that reg into an auction where it can be bought by anyone.

Number plates in Hong Kong can be up to 8 characters long but has its fair share of restrictions. E.g. it cannot be similar to already issued vehicle registrations, it cannot have more than four of the same character in a row, etc.

New to the number plate game, Latvia began offering personalised number plates as recently as 2006. Originally it only cost 542.80LVL to buy one but this was soon increase to 2,500LVL because it was deemed too affordable (really).

Latvian personalised number plates can be 2 to 8 characters long and can be made up of letters, numbers and spaces. That is a lot of customisation.

Poland doesn’t offer a great deal of customisation options as all number plates must use the correct voivodeship character (a letter denoting the region in which the vehicle was registered) followed by a single digit. After only 3 to 5 characters can be used, and letters and numbers must be kept separate.

Rather uniquely all custom plates get their own allocated design, which is black letters on a white background.

Personalised number plates have become huge in South Africa with some of the best ones costing as much as R10,000 to buy. After purchasing users also have to pay a yearly fee to maintain the rights to the specific registration. This alone can be R200 – R300.

The registrations themselves can be 1 to 6 characters in length and can consist of letters, numbers and spaces. Additionally there will be a two letter code denoting the province in which the vehicle was registered (e.g. the letters “WP” indicates “Western Cape Province”).

The UAE have an interesting system based on auctions in which they sell what are known as “distinguished plates”. Different from personalised plates, these registration marks are more similar to our cherished registrations.

Normal UAE number plates consist of five digits and a sixth optional digit depending on which Emirate the vehicle was registered. Distinguished number plates are any combination of this format that might hold mass appear (i.e. 12345, 55555, etc), as well as anything with fewer digits. This format means that registrations like “1” are available, but in this instance it cost 52.2 million Dirhams (over £9million).

Distinguished plates attract a lot of interest and are sold at auction for the benefit of character. Many dignitaries also take part. The aforementioned “1” number plate, for example, was bought by Sheikh Mohammed, the Emir of Dubai.

Across the pond, all 50 states offer the right to purchase a personalised number plate for a small cost. As we’ve seen with other countries, drivers can pay a yearly fee to keep the rights to their number plate. Exact prices depends on which state you become registered, but that isn’t all.

Not only do individual states have the rights to charge whatever fee they want, they also have localised authority over possible combinations. This means that registering your personalise d plate in one state will not make it unavailable elsewhere. In theory you could have 50 of the same number plate driving around the US.

Each state also has their own design which they intend to reflect on the state’s personality and history. This at least goes some way towards differentiating between the similar number plates. However there have been reports that some people use the designs to their advantage, e.g. Florida’s number plate design features an orange which some people use to act as an O.