We have been receiving a lot of questions about what is allowed on acrylic number plates and what is not. Hopefully this blog will clear things up for everyone.

DVLA issue private registrations which can resemble names or words BUT it is an offence to rearrange the characters or alter the spacing. This is because number plates are functional, the exist primarily to identify the vehicle for enforcement purposes. Hence the existence of standard fonts and formats.

A new format had to be introduced on September 1st, 2001 as the previous prefix letter arrangement had come to the end of the alphabet. The current number plate format consists of two letters, two numbers and finally followed by three random letters.

Consultation with interested parties, particularly the police was carried out at length. According to research, the first few characters are more likely to be remembered by a witness. Therefore, the first two letters indicate an area e.g. NT denotes a vehicle registered in Middlesbrough, North East of England. 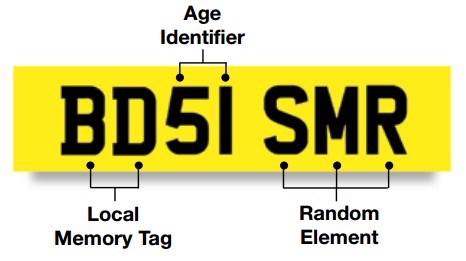 The plate displayed at the front of the vehicle is white with black letters while rear number plates have black letters on a yellow reflective background. The size and shape of these acrylic plates vary depending on the model (for example, some Jaguars have curved plates rather than the standard shape), but the measurements for the characters are very specific and are as follows:

The font that is used on all legal plates  is named "Charles Wright".

From September 2001, new motorcycles were required this to display the rear plate already (previously, motorbikes occasionally showed a curve plate along the front mudguard). This one rear plate on a motorbike is always square. As you would expect, the dimensions are slightly smaller:

Prior to 2021, if you were lucky enough to own a pre-1973 classic or vintage vehicle you are entitled to an older style of plate. From 2021 however, the rolling 40 year tax exemption rule will prevent the sale of vintage (black/silver) plates to vehicles newer than 1980s models.

These older, vintage number plates are not made of acrylic like the standard type, there are actually metal, and are black and silver in colour. A company in Sheffield (Jepson and Co Ltd) specialises in making these traditional plates using original dyes and presses dating back a hundred years.

While you are unable to alter the legally mandated format and spacing of standard registration plates there are various other designs that you can take advantage of. Bare in mind though that this does change over time, and it was only recently that the honeycomb background was made illegal.

What is legal currently though is what is called "3D Lettering" (also known “two tone”). These are the same in size and shape to the standard font, but rather than plain black the letters are shaded with a second grey colour. This makes the characters appear as if they have been raised.

You can also put a flag on the side of the plates. The Union Jack, St. George Cross, Welsh Dragon and the St. Andrew Cross (Scottish Saltire) are still legal as arer various identifiers such as GB, UK, SCO, CYM. Neither flags nor identifiers can be more than 50mm wide and must be displayed on the left hand side of the number plates. As of January 1st 2021, the EU flag will not be used on number plates in the UK.

Number plates with legal fonts and formats are a requirement for MOT test. Displaying illegal plates can land you in trouble with the police.

In extreme circumstances, the Secretary of State for Transport can withdraw the registration mark from you – though I can’t say I have ever known this happen unless the number plate has been offensive in some way.