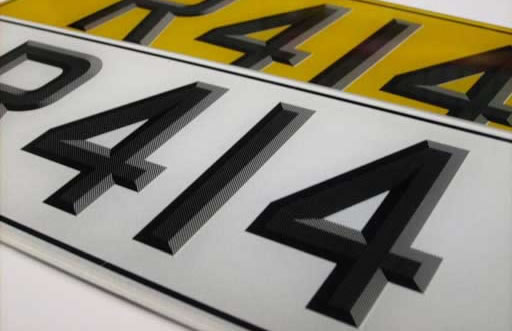 If you are buying or have bought a number plate you might have noticed you have the option to customise the plates with two-tone lettering – creating a 3D effect. It looks a bit different to the usual matte black letters, so is certainly an attractive choice. But, are 3D numbers legal?

Let’s look at the facts.

We know DVLA have strict guidelines on how a number plate can be made and displayed. If you are interested in the whole legislation the Road Vehicles (Display of Registration Marks) Regulations 2001 document is available to the public, but here are the main points.

11.—(1) No reflex-reflecting material may be applied to any part of a registration plate and the plate must not be treated in such a way that the characters of the registration mark become, or are caused to act as, retroreflective characters.

(2) A registration plate must not be treated in any other way which renders the characters of the registration mark less easily distinguishable to the eye or which would prevent or impair the making of a true photographic image of the plate through the medium of camera and film or any other device.

The main things to take from this is that the 3D effect cannot obscure the letters. This would mean alteration of font, as well as embossing/raising the letters (such as with pressed plates), would be illegal.

If you are buying 3D number plates from National Numbers we provide a two-tone lettering which retains reflective qualities, so would in theory be fine. Though it is an alteration in the colour of the font, the actual font is the same. This in itself is supported in the legislation.

More over Section 15.4 details formats which are illegal:

(a) in italic script,

(b) using a font, other than italic script, in which the characters are not vertical,

(c) using a font in which the curvature or alignment of the lines of the stroke is substantially different from the prescribed font,

As there is no mention of 3D lettering – or indeed any alteration to the shading of the letters – it is safe to say that the format is indeed legal.

It is important to know that National Numbers uses Jepsons & Co Ltd, a DVLA registered number plate supplier, for their acrylic plates. Jepsons also supplies for numberous car dealerships across the country and only provide customers with road legal number plates.