Many people are understandably confused about the effects Brexit will have on Great Britain. From food supplies to healthcare, funding for regional areas and even things like education and small businesss, nobody is quite sure what’s going to happen. But the most important thing on everybody's mind is clearly? Number plates after Brexit.

Many people are understandably confused about the effects Brexit will have on Great Britain. From food supplies to healthcare, funding for regional areas and even things like education and small businesss, nobody is quite sure what’s going to happen. But the most important thing on everybody's mind is clearly? Number plates after Brexit.

Will Number Plates Change After Brexit?

Firstly, let’s look at the flags on number plates.

Currently you are able to have one of four flags on your number plate. These are the Union Jack, St George’s Cross, Scottish Saltire, Welsh Dragon and the Euro Symbol.

So will you still be able to have the Euro symbol on your GB number plate, even though we are no longer in the EU? As far as we know, there will be no legal obligation to get replacement plates and take out the EU symbol from your number plate. This would be a huge ask as there are currently millions of cars registered with the EU symbol. But maybe it’s worth not getting the EU flag on your number plate after Brexit, or if you are making a purchase this year. Just in case.

Will I Need a GB Sticker on My Vehicle After Brexit?

Once we leave the EU however, this may change. And UK vehicles may well be treated as any other state not in the EU, so you will require to have a GB sticker on your vehicle. But we await the verdict on that from the DVLA.

No, these are set by the DVLA and have nothing to do with the EU. You can probably tell this by the fact that GB number plates are completely different formats to those in any other European country. So no, that part of number plates will not change after Brexit.

And that about covers British number plates after Brexit. Hopefully you’re well prepared for any and all eventualities now you armed with this information on whether or not number plates will change after Brexit, and you can move forward worry-free into the world of uncertainty that is Brexit.

And while you’re here, why not have a look at our wondrous mix of Brexit number plates? The best is probably T1 XRB, which read backwards (and therefore in wingmirrors and rear view mirrors around the country) is the closest you’ll get to the word Brexit on a number plate. 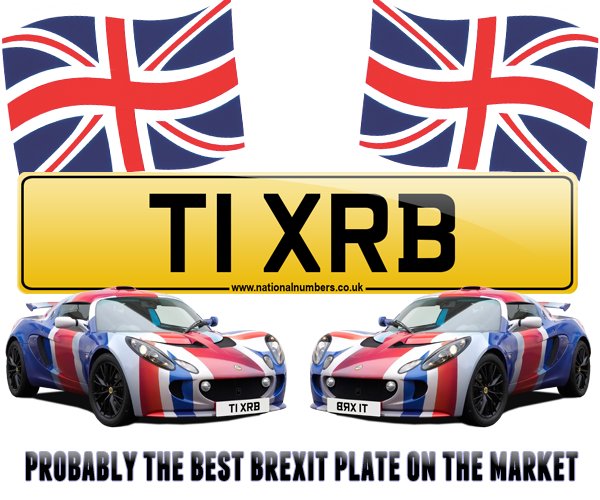