Ten Most Expensive Number Plates From The Last DVLA Auction

As you may or may not know, the DVLA release new number plates at different times throughout the year.

Ten Most Expensive Number Plates From The Last DVLA Auction

As you may or may not know, the DVLA release new number plates at different times throughout the year. 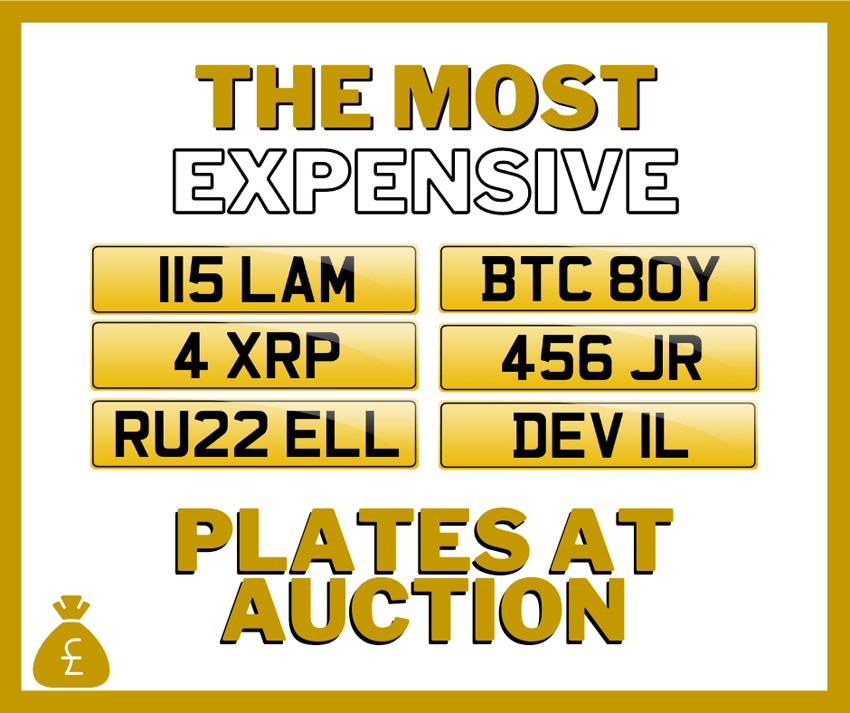 Let’s take a look at some of the most expensive and funny number plates to be sold at the most recent DVLA auction, starting with Satan.

DEV 1L is the perfect private number plate if you’re wanting to spell “Devil”, which is probably the reason for its enormous hammer price. To be honest, we didn’t expect the DVLA to even release this one as they usually reject any controversial registrations. We also didn’t quite expect to see it go for the astounding amount it went for, a whopping £240,010.

This puts it at the top of the list by some margin, and it was either Lucifer himself who made the purchase or someone with a hell (sorry) of a lot of money to spare.

Ideal if you’re initials are JR (check the name at the bottom of this article… Maybe next time, eh!), this one isn’t quite as exotic as DEV 1L, but it still managed to command a highly respectable price at auction.

More than most people’s annual wage, some JR was absolutely not being beaten on this one!

Something a bit more recognisable now, well, if you’re into cryptocurrency that is. That’s because BTC actually stands for Bitcoin, the world’s leading cryptocurrency token and by far the most popular. Somebody must have got involved in the crypto game early to be able to afford this one, so much so that they want to shout about it as they drive around in their (probably) very expensive car.

The letter “I” isn’t legal on UK registrations expect for Irish number plates, so plates with the number “1” are extremely popular for those trying to spell a word with an “I” in it. This is the case for the buyer of this plate, as it almost perfectly spells out the word “Islam”.

We can only assume this buyer has some sort of affinity with the Muslim religion, which goes pretty much in the opposite direction to the plate at the top of the list! There’s a great chance it’s simply the buyer’s name, too, as there are just shy of 12 million people with "Islam" as a surname, and just over 825 thousand with "Islam" as a forename.

This was always going to be an expensive registration as it just has a singular letter in it. It’s probably why it fetched such a huge hammer price, and we have to admit, it’s a really nice plate.

Another one for me, this Russell plate came with an enormous price tag at this year’s number plate auction. It’s not a surprise, to be fair, given that it is literally the perfect spelling for Russell, which is likely the first name or surname of the buyer.

A fan of statutory sick pay? Or maybe a set of initials? Either way, the buyer of this plate wanted it enough to shell out an incredible £25,010 on this lovely number plate.

If you didn’t notice yet (and the buyer of this one would be dismayed if you didn’t), number 8 on our list spells “Alam”, which is a fairly common Arabic, Hebrew, Hindi, and Malay masculine name.

Alam has different meanings in different cultures, ranging from “world” and “universe” to “knowledge” and “field of interest”. However, the meaning behind whoever bought this one might be “absolutely loaded”, given the price they paid for this private number plate.

1 plates are always expensive, especially when the 1 is on its own on the reg. In fact, the most expensive number plate in the world is literally “1”, and can be found the United Arab Emirates. It was purchased by Abu Dhabi businessman Saeed Abdul Ghaffar Khouri in 2008 for a price tag of £7.25 mil.

That one (get it?) wouldn’t actually be legal on UK roads, so the buyer of 1 THM settled for this one for just over 22 grand.

XRP is another cryptocurrency token, but this time in the Ripple network. A direct competitor to Bitcoin with a lower price tag when it comes to number plates (apparently), XRP is something you might be hearing more about as the world of crypto continues to grow.

With the top ten covered, let’s take a look at a few private registrations that didn’t make the top ten list, but went for a pretty penny.

Pretty much the perfect “Louise” plate.

Inks? Perhaps purchased by a tattoo artist? Or a car-driving octopus?

And our favourite on the list, the perfect plate for an “old git” with loads of money.

If you’re after a private plate for yourself, you can search for yours on the National Numbers website, where we have over 61 million personalised number plates for you to choose from, with 0% finance available across the board. 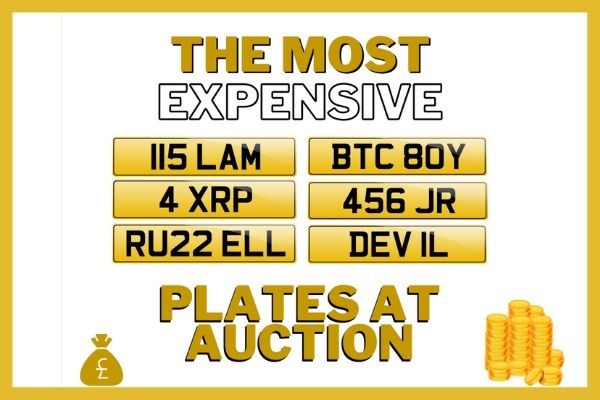 Based on 3467 reviews
See some of the reviews here.